With 5G here, will 4G networks be going away? 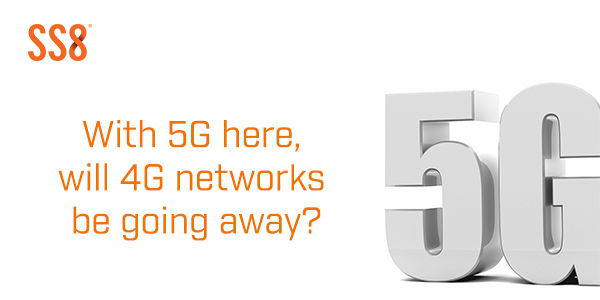 With 5G here, will 4G networks be going away?

5G is here. It’s being rolled out in countries around the world. You may have started to see operators marketing their 5G offerings online, in print and on television. With that said, 4G networks have been around for almost a decade now. A reasonable question is, are 4G networks going away?

4G networks have served us well. You have to remember that with 4G came mobile broadband and those faster speeds led to creation of the app economy. Before this, services were created for laptops and desktops first, and if, and how it would run on mobile devices was an afterthought. Smartphones were designed to take advantage of those speeds with big, high resolution screens and cameras. With mobile broadband, the true potential of being mobile and with the world at your fingertips was reality. It changed everything.

As 4G was appearing, new technologies and innovations arrived, such as the concept of smart cities, Internet of Things (IOT), autonomous vehicles, artificial intelligence, the cloud and so on. The big change with 4G was the bandwidth available. 4G did not address limits on the number of mobile devices that could be supported in a geographic area, the latency or even battery life. In order for these ideas to reach their full potential, they need more than increased bandwidth. The specification for 5G will meet these needs.

Back to the question – with 5G coming, will 4G go away? The answer is, not any time soon. And there are good reasons for it, I’ll share a few.

First, 4G networks keep improving steadily. A 4G network today is roughly 4x faster than when it was launched nearly a decade ago. For a subset of the mobile users, those faster speeds are enough, and for those subscribers, they may not see a 5G network for years to come. There are situations that 5G is needed – it could be a massive IOT deployment, like in a mall; or, it could be where self-driving cars are pumping gigabits of sensor data to the mobile edge and real-time responses are needed. In these places, 5G will be present alongside and in conjunction with 4G. In situations where there has never been a mobile network – perhaps an office building with a lot of interference – in these places, a 5G network may be installed on its own.

Second, it takes time to put up 5G towers. The spectrum that is used for 5G covers a much smaller distance than what was used for 4G. There’s going to be a lot more towers needed to cover a given area. Putting up towers will take years, maybe a decade for a country the size of the United States. While that is happening, you need the 4G network to bridge the gap.

Lastly, there are places in the world where 4G networks are just being launched and they will not be upgrading to 5G anytime soon.

SS8 was first to market with 4G Lawful Interception and we continue our leadership by being first to market with 5G. Through our 5G journey, we have learned and identified the changes and challenges for telecom operators and for law enforcement when moving to 5G. We look forward to sharing that knowledge with you.

See our past webinars by visiting our resources page.